TEMPORARY  EXHIBITS  AT  THE  STATION

A travelling exhibit from the Union Pacific Railroad Museum, “Wheels of War” will be displayed at the Suffolk Seaboard Station Railroad Museum Friday, June 25, 2021 through Monday, July 12, 2021. The “Wheels of War” exhibit traces the contributions of the railroad industry to military actions and maneuvers over the past 150 years, calling out specific events and actions to highlight the importance of the railroad. Located at 326 North Main Street, the Suffolk Seaboard Station Railroad Museum is open to the public daily, 10 a.m. until 5 p.m.  Admission is free and tour reservations are not required but encouraged for groups of 10 participants or more. Call 757.514.4135 or go to SuffolkTrainStation.com for additional details.

ABOUT THE EXHIBIT:
Railroads have played a part in every U.S. war since 1860. During the American Civil War, World Wars I & II, and the Gulf War, railroads transported soldiers and everything they needed, from tanks to uniforms. War is not merely combat but communication, and ultimately, the side with the best supplies wins. Or as Napoleon said "an army travels on its belly,"—meaning that troops can go no farther and no faster than the supplies of food, clothing, ammunition, and equipment can be moved. Railroads keep supplies moving, are interestingly and uniquely durable; repaired quickly and fully from sustained damage. While railroads are seemingly vulnerable because they follow a fixed path, are impossible to disguise and all of their moving parts are exposed; this has proven not to be an insurmountable obstacle.  Instead, railroads are uniquely difficult
to put out of operation entirely and have played an integral role in military missions.

About Union Pacific Railroad Museum:
The Union Pacific Railroad Museum is housed in a historic Carnegie Library building in Council Bluffs, Iowa, where visitors will discover an extensive compilation of artifacts, photographs, documents and equipment from more than 150 years of our nation's most ambitious endeavors – including constructing
​the transcontinental railroad and settling the West. Among the most popular museum exhibits are "America Travels by Rail," which celebrates the height of passenger travel; the Lincoln Collection, featuring artifacts from President Abraham Lincoln's rail car and funeral; and an exhibit that features the technology and innovation that sustain Union Pacific as a railroad industry leader. The Union Pacific Railroad Museum’s mission is to promote a sense of connectedness that is shared by generations of people whose personal and family histories have been touched by the railroad.

No one with a fever or symptoms of COVID-19 or known exposure to a COVID-19 case in the prior 14 days may enter the museum. For general questions, please contact the Suffolk Seaboard Station Railroad at
757-514-4135 or go to SuffolkTrainStation.com.  The Suffolk Seaboard Station Railroad Museum is located at 326 North Main Street in downtown historic Suffolk, Virginia, and is operated by Suffolk Tourism. 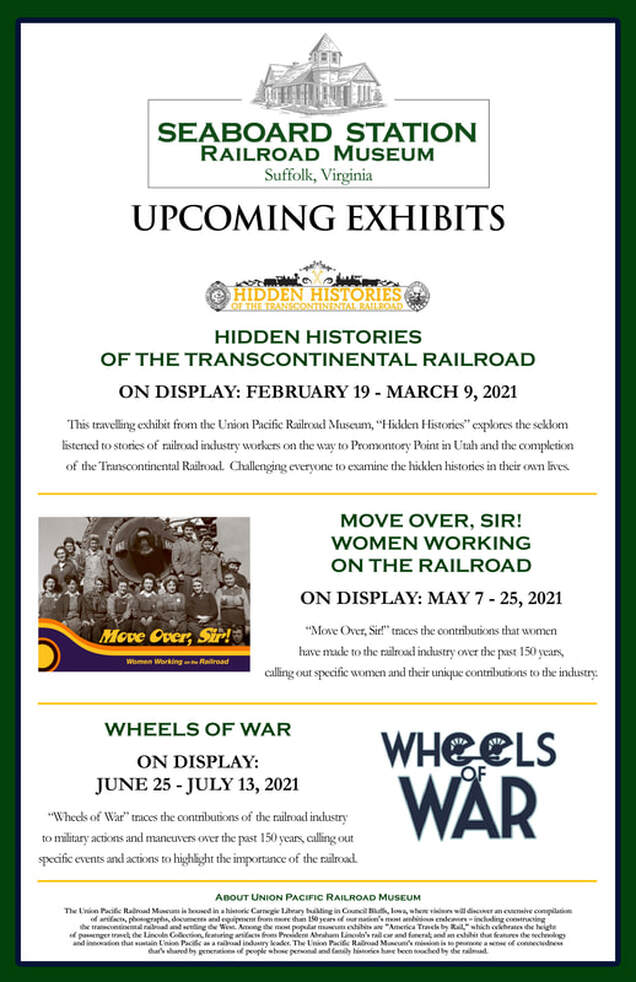